Continuing our bi-weekly artist posts, our latest profile is on post-conceptual artist Wade Guyton. You can keep up to date with our artist profiles by checking the ArtList blog and learn more about Guyton works at ArtList.co.

Guyton creates paintings without considering himself a painter. In true post-internet fashion, he uses printers, scanners and computers to affect his images, rather than applying ink to canvas by hand.

That’s how it started. I was trying to do these stupid marker drawings, something hard-edged and geometric, and I got so bored. It was too much work. I could just type the same thing into the computer, and the printer did a much better job. — Wade Guyton (Interview Magazine)

Guyton creates his own geometric images on his computer or applies geometric markings to a scanned image before printing it onto a canvas that he feeds into his Epson Stylus Pro 9600 (having to fold the canvas in half to fit it into the printer).

In 2013, Guyton’s work was the subject of a solo survey exhibit on the artist. The show included some of Guyton’s flame paintings, in which Guyton adorns scanned images of flames with letters and geometrical shapes.

The series demonstrates how technology can contain something as wild powerful as fire, and the tensions this creates between the mechanic and the natural.

Guyton maintains that there is still a space for error and creativity, even when working with machines in the internet age. He preserves the imperfections that his canvases develop from paper jams, ink clogs or from simply being dragged across his studio.

He asserts that there is still space for individuality and human error in the internet age; he gives us hope that we can retain humanity in the face of, and even in conjunction with, technology.

Untitled, 2006 (Courtesy of the Whitney Museum)

He also gives us hope for the future of the art world.

Last year, Guyton tried to torpido his own auction sale by threatening to produce copies of his fire series, in order to dissuade the prospective seller. Guyton is a vocal oponent to the unjust duopoly of the auction house giants; a mission that we at ArtList share in splitting our commission on all sold works 50/50 with artists.

You can acquire a Wade Guyton print now at artlist.co

The latest of our regular artist profiles is up on the ArtList blog! You can read it below, keep up to date with our bi-weekly profiles by checking our blog, and learn more about Nir Hod works at ArtList.co.

Nir Hod is a man of many talents.

The Israeli-born and trained artist began as a poet and photographer before creating sculptures and, ultimately, the hyper-realist paintings for which he is most renown.

Through all media, Hod seeks to question the stability of identity, highlighting our own personal confusions before our very eyes.

Hod in his studio (Interview Magazine)

Hod’s work questions our ideas of personal authenticity, blending seemingly incompatible ideas of self-identity and questioning the fixity of others. He proposes that we can be embody multiple identities at one time, sometimes even serving as both his own male and female models for a painting.

His 2011 solo exhibition at Paul Kasmin Gallery synthesized Hod’s investigation of personal identification in a series of paintings and sculptures of paradoxical children: part child, part adult, trapped within the cross-sections of social categorization.

Hod portrays his ironic children as affluent and sophisticated individuals, implementing the opulent, excessive aesthetic that defines Hod’s hyper-realism.Hod also uses these children to examine the ideas of wealth and privilege, concepts that can be seen throughout the artist’s work.

“I wanted to take the expressions of the really sophisticated. People always have something very bitter in their face because they have always been very spoiled. When you are too sophisticated, you almost separate yourself from society because people don’t understand you…You become lonely because people are afraid of you.”
— Nir Hod (Interview Magaizine)

Thus, privilege itself exemplifies the themes Hod looks to explore; that at any one time we are conflicted in our own identity; between male and female, sophisticated and lonely, life and death.

Hod is based in New York City. His work has been the subject of exhibitions for over two decades, including a survey exhibition at the Tel Aviv Museum of Art and solo shows at the Paul Kasmin Gallery in New York, Alon Segev Gallery in Tel Aviv and the Davide Gallo Gallery in Berlin.

We have started a series of regular artist profiles in conjunction with our newest project, ArtList. Here is a sample of what you can expect and you can always keep up to date with the profiles or get more information on the ArtList blog.

Of the many different art media, few may seem as age-old as “tapestry,” a form perhaps most strongly associated with medieval ages and unicorns.

Margo Wolowiec is changing that. Those Sounds at that Place, 2014 (Courtesy of Anat Ebgi)

Within this historic medium, Wolowiec combines ancient Navaho and Bauhaus techniques with abstracted, social-media sourced images to create works that are both firmly rooted in the present and transcendently timeless.

In expressing this unique combination of past and present, Wolowiec maintains incredible control over her color palette, hand-dying each thread as she weaves. Her soft, dark colors affect a plush, inviting texture, playing off of the dynamic textural quality that is unique to woven works. A closer look at a Woloweic piece (Courtesy of Patternbank)

Wolowiec’s works often examine the ideas of error and perfectionism within art. Her recent exhibition,

, at Lisa Cooley in New York depicted the grandeur America’s Western landscapes, adorned with judgmental marks one would expect to see on a rejected darkroom contact sheet. 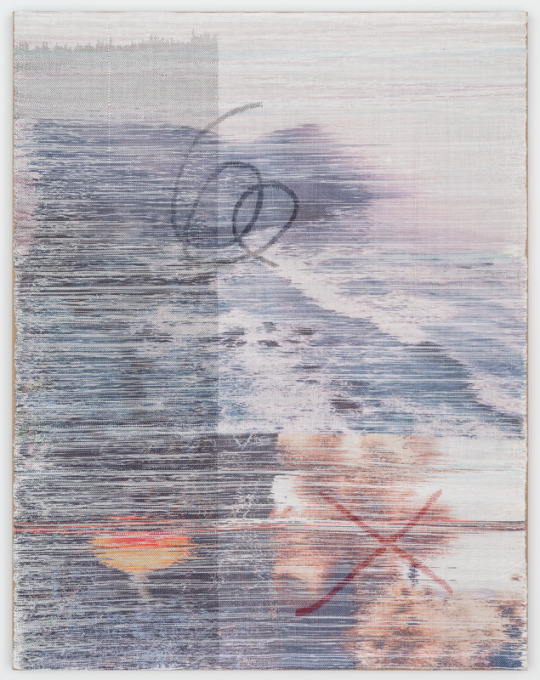 The presentation of such landscapes, blurred and softened by her weaving and adorned with seemingly critical marks, distances the viewer from the image presented. She questions the extent to which one can “correct” an object within the process of artistic creation.

Thus,Wolowiec’s weavings ask us to not only see the landscape presented but to judge it as well.

Wolowiec has also had solo shows at Anat Ebgi in Los Angeles, Johansson Projects in Oakland and Playspace Projects in San Francisco. She was also included in the recent three artist show Le Mer Insomniaque at Laura Bartlett Gallery in London. She lives and works in Brooklyn.

You can acquire a Margo Wolowiec tapestry now at artlist.co