1. Julian Schnabel View of the Dawn in the Tropics: Paintings, 1989 - 1990, Gagosian Gallery
(April 17 - May 31)
Closing this Saturday, this exhibition of Schnabel’s twenty-five year old series revisits Schnabel’s intensely visceral paintings, more embodiments of emotionality than representations of it. The works made a name for themselves in their antique aesthetic of excess combined with their modernist use of unconventional materials.

2. The Journal Gallery at Venus Over Manhattan
(May 28 - July 26)
In honor of the Journal Gallery’s 10th anniversary, Venus Over Manhattan has donated its space to showcase some of that artists whose aesthetics have defined the Brooklyn gallery. The retrospective show provides an unusually probing look into not just the work the gallery has exhibited by the gallery itself.

3. Dawn Kasper & sun & or THE SHAPE OF TIME, David Lewis Gallery
(April 29 - June 1)
Dan Kasper’s installation performance piece represents the different types of matter, separating and thus examining the experiences we have with each classification. Additionally, you can stop by the gallery tonight to see a panel discussion with Kasper herself.

1. Sophie Calle Rachel, Monique, The Episcopal Church of the Heavenly Rest
(May 9 - June 25)
Not just a piece of work, but a tribute to a mother’s life, Rachel, Monique presents footage of Calle’s mother on her deathbed along with the soundtrack of diary entries she wrote between 1980 and 2000. The show, presented at The Episcopal Church of Heavenly rest in conjunction with Paula Cooper Gallery, speaks to the power of mortality that we all experience.

2. Tim Barber Relations, Capricious 88
(May 2 - June 23)
Barber’s latest body of work seeks to examine just how precarious the relationship between various objects can be. His compositions place objects in what appears to be an unsteady balance with one another to examine the strength of the bond between them and are on display at the magazine publisher and gallery space, Capricious 88.

3. Warm Math, Balice Hertling
(May 9 - July 19)
Balice Hertling has imported and reassembled the modernist, module furniture used in a 1930s Italian housing project, which was meant to create uniformity in production while allowing for individuality of expression between the households. Curator Alexander May will rearrange the exhibit’s furniture three times, to explore how the relationships between the pieces and with external artwork are formed.

And if you happen to be in Paris this weekend, keep an eye out as it is Collector Weekend the 23rd - 25th. 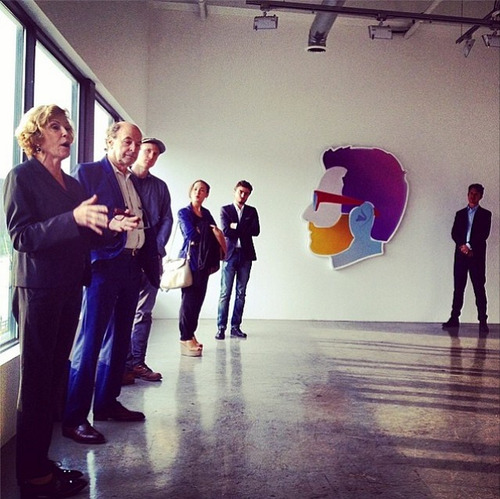 Yesterday Thea Westreich Wagner and Ethan Wagner took Gertrude inside the private storage facility which hosts their 800+ piece contemporary art collection, pending its donation to @whitneymuseum and @pompidoufoundation. One of the most significant collection of our time. Here is a self portait by @alexisrael #alexisrael . Thank you @twartadvisory !

1. Jason Loebs Cold Flow Creep, Essex Street
(May 4 - June 29)
Heat: an intensely felt physical phenomena yet almost impossible to artistically articulate. But Loebs manages to convey this elusive sensation in his new series at Essex Street gallery, which focuses on the experience and significance of heat.

2. Sterling Ruby Sunrise Sunset, Hauser & Wirth
(May 9 - July 25)
Ruby’s work has already made a name for the young artist in its ability to transverse boundaries of influence. Through an incredible variety of media, Ruby infuses the presence of sub-cultural phenomena to compose highly complicated, layered works. His new solo exhibition at Hauser & Wirth includes a major amount of the artist’s works, providing sincere insight into his career and creative process.

3. Camille Henrot The Restless Earth, newmuseum
(May 7 - June 29)
After her first US showing at our Salon with her last year, the French artist returns to the States for her museum debut. The exhibition showcases Henrot’s work, much of which is highly anthropological in its attempt to collect remnants of human behavior and culture.

(Via The New Museum)

Also keep an eye out for Cory Arcangel’s pop up store at the Holiday Inn Soho, where he will be selling his Arcangel Surfware: everything you need to work from your bed.

1. Frieze Art Fair
With over 190 galleries showing and its emphasis on contemporary and living artists, the year’s Frieze (the largest Frieze NY to date) is going to be a big deal. And if you want to experience all Frieze has to offer, there a still a couple tickets left for our VIP tour of the event with an expert art collector: https://gertrude.co/salons/private-tour-of-frieze-art-fair-with-a-top-collector.

(via Venus Over Manhattan)